I am a Whites man. Which is to say I love Whites metal detectors. They are the most powerful, discerning, and durable machines on the market. Whites has been making metal detectors a long long time, and they are very good at it. I got my first Whites Metal Detector, a 6000DB hip mount machine for 100 dollars back in 1982 or 1983, I believe it was. The unit still had some of the original accouterments unopened, in their plastic bags. Like so many other metal detectors, this one had been purchased by a man who had some money, and retired to Florida. After finding about 1000 flip tops, pennies, and bottle caps, with not a diamond ring in the bunch, he put the detector in the closet and forgot about it. Later, he mentioned it to me, and that's how I obtained my first Whites. I have used many of the coin masters since then, and several of the underwater machines, and I will say it again: I am a Whites man. Once I learned the intricacies of the Whites machines (it did take time and a good bit of effort) I was able to use any other detector I came across with ease, though I always went back to my own, and gladly. The best thing about Whites is how well they are made. They are durable, and powerful. I have had some issues, but none I could not address myself, and all the issues were attributable to the facts that A) I am hard on my equipment, and B) they were problems of a mechanical nature, versus electronic. The solid state circuitry and component quality in the Whites machines is top notch, and through normal use will nearly always work well. The mechanical problems that have occurred were because I use the heck out of my machines, a lot.

Fisher metal detectors are good machines too, or so I am told. I have never owned one, though I hear many good reports from many loyal users who would not trade their Fisher metal detectors for anything. I have used them occasionally to see how they work, and the underwater machines, especially, perform very well. Fisher was the first to successfully combine water and land detectors in one easy-to-use machine that worked as well in both arenas. Fisher was bought by Bounty Hunter detectors in Texas just recently, within the last two or three years, and I am told that they are not the same anymore. I know of one man who bought some related detection equipment from Fisher before they sold out, and he had little or no success in getting Bounty Hunter to honor the original warranties on said equipment. I have used Bounty Hunter detectors before a few times, and they are not one of my favorite brands, because the power is just not there.

I have owned two or three Garrett metal detectors in my life, and they are third on my list of machines as far as being user friendly and powerful. Some of the Garretts are fine machines, and the Sea Hunter was the first diving detector I ever saw. It was finding rings and coins underwater long before many other manufacturers had produced underwater detectors. The problem with the Sea Hunter, the earlier models I mean, was that it had a rechargeable battery system which leaked on occasion, and the unit had to go to the factory if the batteries had to be changed, as rechargeable batteries inevitably do. This has been taken care of now I think, but the machine had been expensive and cantankerous early on, and it disappointed some people badly. The two land machines I have had of Garret design both had electrical/electronic problems over the life of their use, and I do not like that. Otherwise though, the machines performed well, with power and good signature sounds for the round objects.

I did the initial field report for Minelabs competition machine called the Sterling (Western and Eastern Treasures magazine, January 1994 -- See below) and I am totally impressed with the technology of Minelab engineer Bruce Candy, because he sees things in different ways, and is not afraid to make that manifest in his metal detectors. Using Broad Band Spectrum technology, Full Band Spectrum Technology, Multi-period sensing, Dual Voltage Technology and more, Minelab has been capable of great miniaturization, while at the same time increasing power and sensitivity. Their underwater machine, the Excalibur, is powerful and smart, but I have heard of leak problems, (See my above statement on the necessity of using silicone grease on all O-Rings and underwater housings). For more information on Minelabs technology go here: http://www.minelab.com/consumer/knowledge-base/minelab-technologies

I have recently been able to use a Tesoro machine for the first time, and these lightweight and powerful machines made in Arizona are well spoken of by nugget shooters in the west. I myself did not get to do any real detecting with the machine, it was a repair I did for a bud in New Mexico, though do not take that to mean the machine broke, it was just missing a part which I replaced. Overall the signal was clear and bright, I don't think you would have any problem telling a good signal from bad with the Tesoro machines.

When everything is said and done, the above metal detectors all have distinct attributes, and their bad points boil down to how well they are made. This is my opinion of course. Another and very important determining factor in buying a metal detector is, of course, price. I buy and sell used equipment, so price is not as big a deal with me as with someone who is going about this for the first time.   I get good deals on all my detectors now, because I try, and I think good deals on all detectors can be found, one must be a super shopper is all.  When buying a detector one must also practice something that will definitely come in handy later, and that something is patience.  Kellyco Electronics in Florida is a good place to find deals on new metal detectors, while ebay is where to look for used equipment, because there is good buyer recourse, and usually the dealers at ebay are very concerned over their selling reputation, and will not mislead a buyer intentionally. The Whites machines are pricey but worth it, because they will last a long time in adverse conditions. You can find a lot and not miss much. Fisher and Bounty Hunter have become a non-issue to me, as things stand now. Garrett always seemed to be too expensive for what they do, and though the Tesoro is a good machine, the manufacturers are very proud of it and charge accordingly. The Minelab machines, in my experience, are very very high priced, but for some professional applications nothing else will work as well, like nugget shooting in the outback of Australia, or for finding other deep things in odd situations. For the casual user and beginner I would not recommend them, although Minelab does have something for everyone, but perhaps not for everyones pocketbook. The Minelab Sterling, and the types like it since, have been classed as competition or new-user machines, because they are ultra powerful, very lightweight, and easy to use.

All around the best deal in metal detecting is Whites Coinmaster line of detectors, with the Classics and newer lightweight, simple, yet powerful machines leading the way to greater depth and general flexibility in the field. For adjustable flexibility the older coinmaster machines as well as the Spectrum and Eagle type machines, are just fantastic tools and well worth the time it takes to learn them. 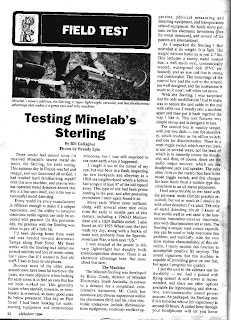 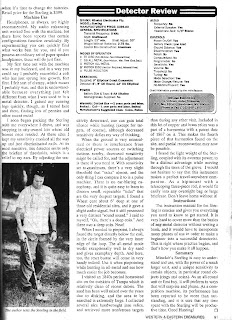